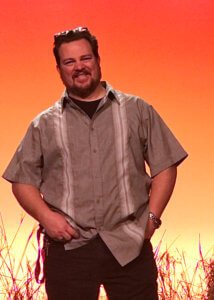 Mr. Scott D. Pafumi is honored to be the Theatre Arts Director at Herndon High School, moving up in the pyramid from Herndon MS (2011-2019). He has been teaching in Fairfax County Schools over the last 24 years, having taught Theatre and Drama in a variety of schools at every grade level from Kindergarten to 12th grades. Mr. Pafumi has also taught as an Adjunct Theatre Professor at Northern Virginia Community College on the Loudoun campus, teaching both Acting and Technical Theatre courses. He has served as the past President of the FCPS Theatre Arts Directors Association and is a company member/performer of the professional group, Dark Horse Theatre Company.

Mr. Pafumi earned a BA in Theatre and English Literature at Virginia Tech (1995) and holds a master’s in Arts Management from George Mason University (2010). Mr. Pafumi specializes in teaching and directing American Drama and Comedy, Shakespeare, Commedia dell’ Arte, Improvisation, Technical Theatre, and Storytelling. He is also a community theatre actor and a workshop teacher for hire, having worked at community centers, colleges, and educational theatre conferences throughout the Commonwealth of Virginia.

Mr. Pafumi's productions and theatre programs have earned him local (CAPPIES), state (VHSL), and national (ABC News) acclaim.  As the founding Theatre Director at Westfield High School (2000-2010), his program was the subject of a two-hour television documentary which aired nationally on ABC’s 20/20 in the winter of 2008.  The program, Drama High: The Making of a Real High School Musical, earned an Emmy nomination for Cultural Arts Programming.

Mr. Pafumi is happily married to another FCPS secondary English/Theatre educator, the proud father of three children, ages teen to adult, and a beagle-lab. He is a resident of Loudoun County, and enjoys staying involved with his church (HUMC) as well as cross country motorcycle tours.